from Super Powers by Dual Core 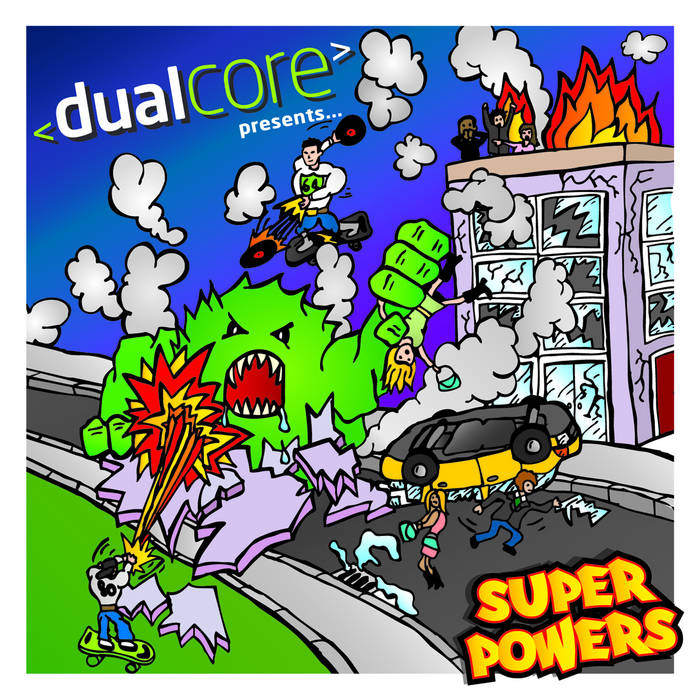 INT EIGHTY, INT EIGHTY!
How do you do it?
What's an average day like for you?

It's all in a day's work, I've said it before
The crime won't stop so I'm ready for war
Rescuing people: adults and children
I just saved these women from a burning building
Helping out the citizens, fighting off attackers
Before that, I apprehended two carjackers
Went to the bank just to make a deposit
And halted a robbery already in progress
So honest, so loyal; fiercely trusted
I serve and protect for the general public
Cat in a tree (meow), climber on a mountain
Pulled a kid out the river 'cause I saw that he was drowning
School bus, hazards, it's down to the wire
The bus had a blowout; I helped changed the tire
Stopped a speeding train that was heading for a crash
Flying toward an orphanage sitting on the tracks (woo woo!)

Wait, somebody placed an orphanage on the railroad tracks?
(Yeah, that's right)
You mean, physically removed the orphanage, from its foundation, buried in the ground, and placed it on some railroad tracks?
And left it there?
(Uhh... well... uh... I gotta go)

It's all in a day's work, they just can't grasp
People don't see how much work I have
Crime's on the decline, after a steep rise
I've earned a reward, now for some me-time
Head to the bar, on the news and I rewind
Taking these shots and it's stinging like a beehive
Out to the dance floor, drink in my hand
I'm cool with the DJ and he's playing jam
Groove in my hips, rhythm on the brain
Smooth with a chick but she's no Lois Lane
Dance a few songs all nice and friendly
Go to take a sip and my drink is empty
Should I keep dancing? Maybe even score?
Feeling pretty good; I could go for one more (bartender!)
Need another round, time to refill
Jerks at the bar and they're hating on my skills

Did you hear that BS about the orphanage on the train tracks? int eighty is such a liar.
(You shut your mouth. int eighty is a great man. He's a hero!)
Are you president of his fan club or something?
I mean the guy is obviously full of himself
(I'll give you a president of the fan club. Right in your face!)

Turn off the treadmill, you're running your mouth
He wouldn't shut down so I'm punching him out
Quick change the deal 'cause this ain't for real
Forget brass knuckles; my skin's made of steel
Temper is boiling the fire erods
Feeling crass, shatter glass, strike a match and explode
Fury in a rage, out the cage like an animal
Whoops we're in a bar and the alcohol is flammable
Fire everywhere, and everyone's escaping
But I knocked a couple out so I guess I better save them
Smoke so thick it's like breathing exhaust fumes
Gotta find a bathroom for switching up costumes
Outfit's changed and I'm back in the fray
With 80 on my chest so I'm saving the day
(Oh my God, is he alright? What's he have to say?)
He's got 3rd degree burns, but I think he'll be ok, little punk

I'm here reporting live from the scene
Where our inebriated super hero, int eighty
Has lashed out physically at patrons
Sent the bar up in flames
And knocked an elderly woman unconscious
While making his exit
Firemen and EMTs are on the scene
Back to you, Jon

Featuring Plunky of Oneness of Juju and Coldcut & the Keleketla! crew.